The Greater London area will eventually have “the world’s most advanced air pollution map,” thanks to a collaboration between Drayson Technologies, Inmarsat, and the bike courier company Gophr. 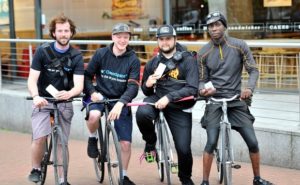 50 bike couriers with Gophr will be outfitted with Drayson’s CleanSpace Tags, which are small air pollution sensors powered by wireless signals, and these sensors will collect pollution data as the couriers cycle their way around and across London each day. The data on carbon monoxide levels that gets collected by the sensors will then be imported into the Air Map, which will display real-time pollution levels at each sensor’s location. As the bike couriers are estimated to cover some 17,000 miles each month, the air pollution data, which includes both indoor and outdoor air, is expected to be “on a scale that has never been achieved previously.”

The CleanSpace Tag sensors are the first products to be powered by Drayson’s Freevolt technology, which allows the devices to “harvest” radio frequency (GSM and WiFi) signals for their energy, which is then used to power the low-energy devices, essentially allowing the devices to never have to replace their batteries.

The location data will come from other devices, LoRa trackers from Inmarsat, which the couriers will also be supplied with, that capture the real-time location and height data of the couriers, allowing for precise tracking of the location of each pollution data point. By employing the LoRa trackers instead of using the location services on the courier’s mobile device, it reduces the drain on the battery, which is often already in heavy use.

“The CleanSpace network aims to provide the world’s most advanced air pollution map using thousands of personal sensors powered by Freevolt. This partnership brings together the combined expertise and commitment of Drayson Technologies, Gophr and Inmarsat so that people in London can see the air they breathe and help to create, not just a smart city – but a smarter society.” – Lord Paul Drayson, Chairman and CEO, Drayson Technologies

According to Drayson Technologies, more organizations, groups, and individuals will be employing CleanSpace Tags in the near future, in order to collect more air pollution data and to further build out the air pollution map of London.